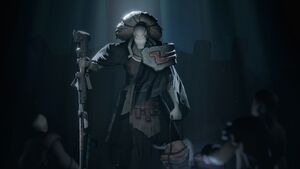 Amiren is the Matriarch of the Listeners. Once a kind leader, the twilight of the third Age of Light saw her shift into cruelty and paranoia. Sundering the Twin Hearts of Lathyrus, she took the Listener Heart and went into hiding.

Amiren will attempt to stomp on you and cleave the area with her staff. She can also cover a lot of ground by dashing. She will also attempt to cleave you with her lantern, temporarily leaving a trail of damaging purple runes in its wake. Occasionally she sets her lantern down and hits it with her staff three times, generating three consecutive shock waves of increasing size.

You can optionally break her lantern. This will make her far more aggressive, but it will also increase her damage taken.